How To Play Guide For Kingsway

Greetings, new user! You are now the proud owner of Kingsway, the hottest new operating system on the market! Soon enough, you will be venturing across the realm using our top-of-the-line World Navigator and organizing all of the loot you will find with our user-friendly item management "drag-and-drop" utility. But every user needs to start somewhere, so please feel free to utilize the resources provided below to ensure your adventure with Kingsway is satisfactory and as non-lethal as possible!

Before delving into the realm of Kingsway, you will first need to create a character. Do this by selecting the New Adventurer icon on the opening screen inside the "Select Adventurer" window, and click the Continue button. A new window will pop up, labelled "New Adventurer". Choose a name (or let the game generate one for you), character class, and edit your portrait before clicking the Accept button. Your name and portrait are purely aesthetic choices and do not affect gameplay in any way. 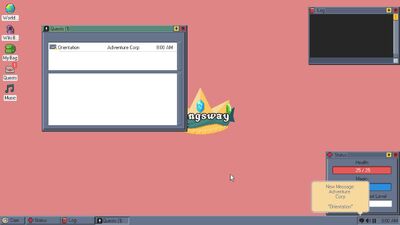 Once your character has been created, the startup sound will play and you will find yourself on the Kingsway desktop. It should look more or less like the image on the right (Figure 1). On the left side are your desktop icons as well as the open Quests window. Your first quest, Orientation is ready to be opened. Go ahead and read it over. This first quest asks you to travel to the nearest Fort and visit the Guild. Before we set off to travel, we should open and arrange our essential screens. Double click the icons for World Navigator, My Bag, and your character (the hooded purple icon). Arrange your screens however you like, but they should ideally be visible without overlapping each other. While you're doing this, you may also want to drag your desktop icons somewhere else, such as the middle of the screen. You start with some items in your bag, as well as a Broken Sword and Dirty Shirt equipped to your character. You can drag your King's Summons to the desktop to free some space in your bag as well.

Now that you've set up your screens to your liking, it's time to start traveling. Yellow points in your World Navigator are unexplored areas, while gray ones have been visited before. You can travel to any point or location within a certain distance, regardless of the terrain. Points in your range will be marked by a yellow line connecting them to your character. Your first quest is to go to the Fort, which should be within a couple points of where you begin. Click a point in range and select Travel to move. A new screen will appear with a loading bar, detailing where you're headed and how far you have left to travel. You may encounter monsters while traveling, so be ready to act! Also note that time is passing, indicated by the icon in the lower right next to your clock. This also happens in combat (at a slower rate). If you reach the keep without having to fight, go ahead and skip to the Structures section.

When a monster appears, it's time to act! When in combat, each monster is a discrete screen with information and graphics about the monster's actions, as well as your action buttons. Monsters perform actions at regular intervals, indicated by the first progress bar. When it fills, the monster acts. Usually, this is a direct attack on your character, though some monsters can do other things such as heal themselves or perform special attacks. Certain monster attacks are avoidable; these appear as a fast-moving screen with a progress bar and an AVOID! button. Monster screens also move in unique patterns depending on the monster.

Your actions will also take time, indicated by the second progress bar. You start the game with three basic actions. Attack is a simple, direct attack on an enemy, taking a second or two. Speed and damage are influenced by your weapons and stats. Block lets you quickly enter a guarded state that reduces damage, but you must use the same button again as Unblock to do any other actions. All characters block 50% damage by default, but this is increased by their shield. Finally, Escape lets you try to run away from combat. This can fail or succeed, generating a screen in either case. Some fights cannot be escaped, in which case Escape will tell you so. In addition to these basic actions, your character can learn new ones by acquiring Skills (see the next section) through leveling or magic items.